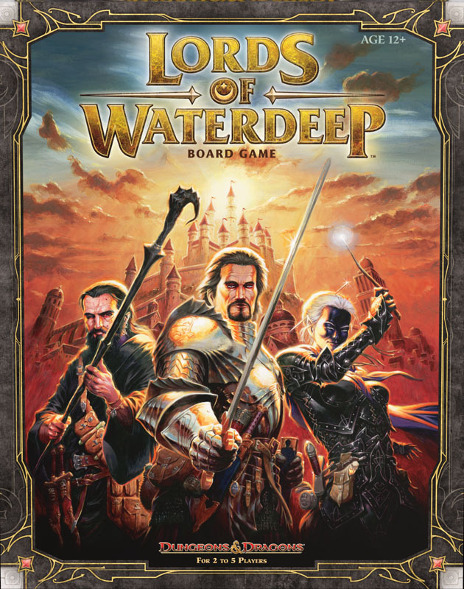 Lords of Waterdeep is a strategy board game for 2-5 players. Each player takes on the role of one of the masked Lords of Waterdeep, secret rulers of the city. The players use their agents to recruit adventurers to go on one of five different types of quests (piety, arcana, skullduggery, commerce, and warfare), which earns rewards (usually victory points and other rewards) and increases that lord's influence over the city.
Each player is dealt one of the Lords of Waterdeep, which is kept face down. They are allowed to look at the Lord at any time. Each Lord gives a player points at the end of the game for completing certain types of quests or controlling buildings.
Lords of Waterdeep is primarily a worker placement game. Players place their agents on various spaces around the city which allows them to take actions like collect money (gold), gather adventurers (resources), draw or play Intrigue cards (single-use special abilities), or gain Quests (the fundamental way to earn Victory Points).
This description uses material from the Wikipedia article Lords of Waterdeep which is released under the Creative Commons Attribution-Share-Alike License 3.0.