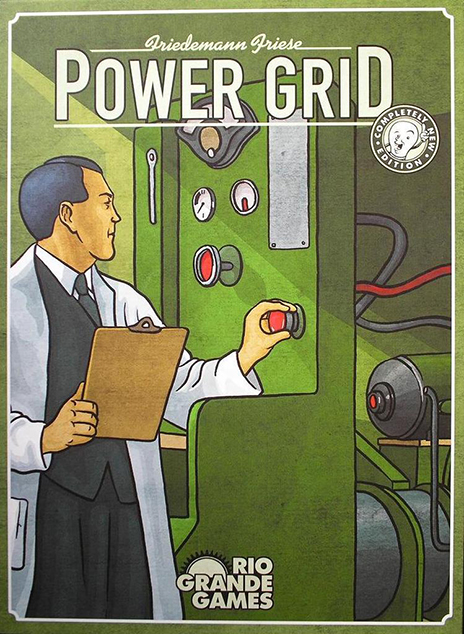 The game comes with a double-sided board with a map of the United States of America on one side and Germany on the other. Each map consists of six regions featuring cities with connections of varying costs between them. The number of regions used is based on the number of players. Map design itself is a key feature in the strategy of game play as some areas of the map feature generally higher connection costs compared to other areas of the map.

The game is played in rounds, with each round consisting of 5 phases:

The game ends after one player builds a fixed number of cities. The winner is the player who can supply electricity to the most cities with his network. Tie breakers are who has the most money, then the most cities.

Phase 2— Auction Power Plants
Turn order determines who begins the bidding on power plants. The first player begins and may choose to pass rather than bid on a chosen plant, in which case they forfeit the chance to bid on any power plants on a given round. A player must begin with a bid equal to or higher than the value of an available power plant. After the initial bid, players take turns bidding in clockwise order until every player has passed on a current bid. Once a plant is purchased, the player with the highest priority turn order (which may still be the first player) has the option to bid on an available plant. The phase ends when every player has either purchased a plant or passed on their opportunity to bid on a plant. When a plant is purchased, a new one is drawn from the deck to replace it, however the available power plants are always re-arranged in numerical order according to their value. Thus a newly drawn plant may push an existing plant into the lower row making it no longer available for bid or push it to the top row, making it available.

Phase 3— Buying Resources
In reverse turn order, players have the opportunity to buy resources for their plants. Players may only purchases resources they can use, and each plant may only hold twice the number of resources it needs to run. Thus a plant that uses two oil, may hold up to four oil. As resources are purchased, they become more expensive, thus the person in last position in terms of turn order has the opportunity to buy resources at the cheapest prices for the round.

Phase 5— Bureaucracy
During this phase, players expend resources to power their cities and earn more income (Elektros) based on the number of cities they power. Resources available to be purchased are replenished at a rate based on the number of players in the game as well as the current Step. Finally the highest value power plant is placed at the bottom of the draw deck (this changes in Step 3).

The game is further divided into 3 "steps". In step One, 8 power plants are visible to players arranged into two rows of four based on their numerical value ranking from lowest to highest. The first row of the lowest numbered plants is available to be bid on by players. In step one, only the first slot of a city may be built into.

Step Two is triggered when any player builds a set number of cities determined by the number of players in the game. In Step Two the lowest level plant is removed (this is only performed once). In addition, the second city slot becomes available for players to build into. Finally, the resource replenishment rate is changed.

This description uses material from the Wikipedia article Power Grid (board game) which is released under the Creative Commons Attribution-Share-Alike License 3.0.