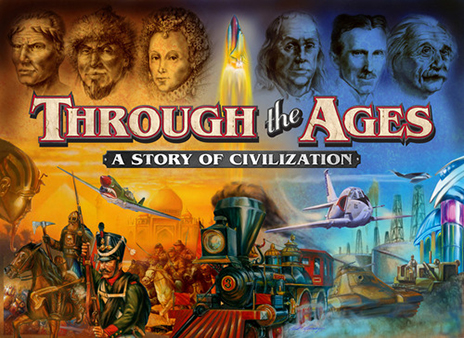 Through the Ages: A Story of Civilization

Through the Ages: A Story of Civilization is a board game for 2–4 players designed by Vlaada Chvatil and published by Czech Board Games in 2006. Its theme is the development of human civilization and the players determine the progress of their own civilization in different fields including culture, government, leadership, religion and science. The game has won multiple awards including the International Gamer’s Award in 2007 and Game of the Year in Poland in 2010, where it was published as Cywilizacja: Poprzez Wieki.

The game is about building a civilization, including urban buildings, governments, population, resource productions, military etc. By drawing and buying cards the players take their civilizations through 4 ages - beginning with classical antiquity and ending in the Modern Age.

Through the Ages is a civilization building game. The goal is to develop your civilization, not to destroy other ones. Military strength is just one aspect of your nation, as well as population, production or science. It is up to you which aspect you will concentrate on, more or less, but you should not underestimate any of them while building your civilization. Victory is achieved by the player whose nation produces the most culture during the game. However, there are many ways to produce culture: through religion, literature or drama, by building wonders, by utilizing cultural persons etc. Considerable amount of culture can be gained even via wars or aggression.

This description uses material from the Wikipedia article Through the Ages: A Story of Civilization (board game) which is released under the Creative Commons Attribution-Share-Alike License 3.0.