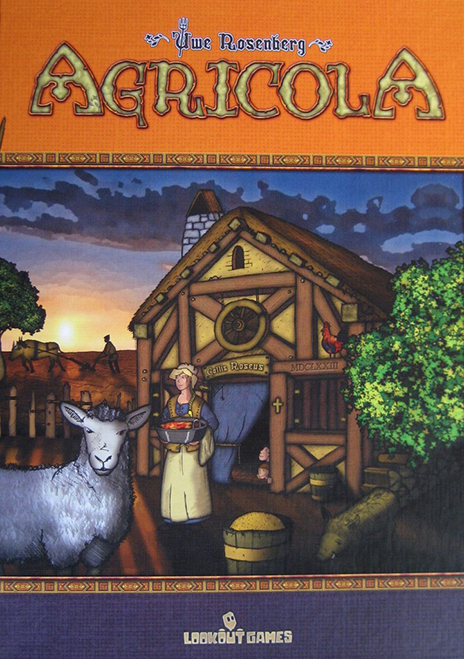 Each player starts the game with a board representing a farm on which are fifteen spaces, two of which are marked as rooms of a wooden farmhouse, and two person tokens, one occupying each of the rooms. The person tokens represent the player's family. A player uses each person token once every round, which is referred to as an 'action'. Actions include acquiring resources, plowing or sowing fields, fencing pastures, building stables, acquiring animals, extending or upgrading the farmhouse, growing the family, and acquiring food. The available actions vary according to the number of players and the rule set used.

The main board of the game is reversible, one side of which is used for the standard rule set and one for the family rule set (identified by an icon of two adults and a child). The board has a set of fixed actions, space for additional action cards based on the number of players, and space for fourteen round cards, each of which has an associated action. The round cards are revealed one at a time, at the beginning of each round, so the actions associated with those cards are available starting from the round in which they are revealed. All other actions are available every round. There is also a board on which ten major improvement cards are revealed.
In a game using the standard rule set, each player is dealt seven occupation cards and seven minor improvement cards at the start of the game. The base game has 169 occupation cards, such as 'woodcutter' or 'bread seller', and 139 minor improvement cards, such as 'fishing pole' or 'bean field'. A player may play a card using one of the actions available on the main board. For the family rule set variant, occupation and minor improvement cards are not used. A player's strategy for the game is influenced by the set of cards dealt to that player.

Resources are used to pay the cost of extending the farmhouse, renovating it to clay or stone, fencing pastures, and playing major and minor improvements. Fields may be plowed and sown, which produce food each harvest. A harvest occurs at the end of rounds four, seven, nine, eleven, thirteen, and fourteen. During each harvest, fields are reaped, each person in the family must be fed, and animals breed. For each family member that is not fed, a player acquires a 'begging card'.

A player's final score is calculated after the end of harvest in round fourteen. It is based on the size and type (wood, clay, stone) of the farmhouse, the number of plowed fields, the number of pastures, the number of fenced stables, the number of each type of animal (sheep, boar, cattle), the number of grain and vegetables, and the size of the family. A player is penalised for having unused spaces on the board, and for each of the point-scoring criteria for which the player did not acquire or build at least one of that type of item; for example, a player scores '-1' for having no sheep at the end of the game. A player may also score bonus points based on the cards played during the game, and loses three points for each begging card acquired.

This description uses material from the Wikipedia article Agricola (board game), which is released under the Creative Commons Attribution-Share-Alike License 3.0.