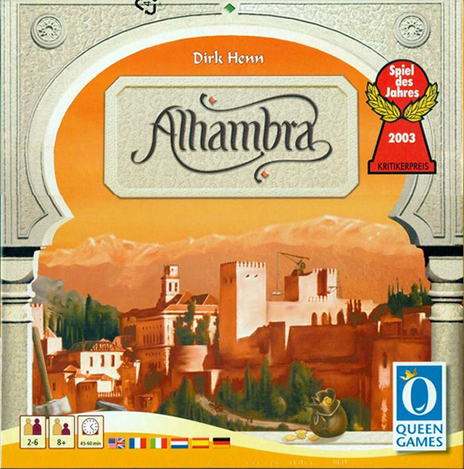 The game consists of a deck of "currency cards" of various values in four currencies (suits) and a bag of "building tiles" of various prices, as well as a number of boards (a currency market, a building market, a reserve board for each player and a scoring track). Six of the building tiles are "Alhambra tiles;" these are taken out of the bag and one is given to each player. Each player is then dealt currency cards until the total value of cards in their hand is greater than or equal to twenty. The currency cards are shuffled into five piles, and the two special scoring cards are inserted into the second and fourth piles. The five piles are then placed in order to form the currency deck. Four currency cards are drawn and placed on the currency market, and four building tiles are drawn and placed on the four spaces of the building market. The set of tiles connected to a player's Alhambra tile is called their "Alhambra."
Players then take turns, during which they may perform one of the following actions:
Draw currency cards – either one card of any value or multiple cards totalling five or less.
Buy building tiles – by discarding currency cards totalling the value of the tile or greater. Each space on the building market has a currency type next to it; all cards discarded must be of that suit. If the value of cards discarded exactly equals the price of the tile, the player gets another action. Tiles must be placed in the reserve board or attached to their Alhambra (players do not have to place tiles in the order they were purchased however).
Move a building tile - either from their reserve board to their Alhambra, from their Alhambra to their reserve board, or swap two tiles (one from their reserve and one currently in their Alhambra).
Currency cards and Building tiles are then added to any spaces on the Currency market or the Building market.
Some tiles have walls along one or more edges. When players add tiles to their Alhambra, it must be possible to trace a path from the new tile to the fountain that was their start tile, remaining within tiles and without crossing any walls. It is also not permitted to create "holes" such that all four sides of a gap are closed in.
When the scoring cards are drawn from the Currency deck, or when the there are fewer than four buildings remaining to be sold, scoring occurs. Each player scores one point for each wall segment in their longest wall. The player with the most of a given building card type scores points according to that type; in case of a tie, points are split between players. More common building types are worth more points, and building types are worth more points in later scoring rounds. In the final scoring round, the player with the most of a given currency type takes the tile of that currency type and may add it to their Alhambra before scoring.
This description uses material from the Wikipedia article Alhambra (board game) which is released under the Creative Commons Attribution-Share-Alike License 3.0.