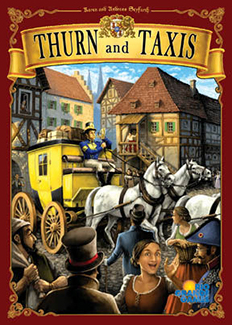 The board is a map of southern Germany and nearby parts of other countries; it is marked into nine provinces, most of which are grouped into five regions. The map shows 22 cities and a network of roads connecting them. Each player has a supply of 20 markers (houses) to place on the cities. Each city may be marked once by each player and the markers remain in place.
Each turn the players draw one or more cards representing cities, then play one or more cards, forming or extending a route through successive cities along a sequence of roads. The route may be extended at either end but cannot include the same city twice. After reaching a certain length, a route may be closed and scored. The player then puts markers on some of the cities on the route that he or she has not marked already — either choosing one city in each province traversed by the route, or choosing one province and marking all of its cities that are on the route.
Points are awarded for the length of the route, for marking all cities in any of the different regions, for marking a city in every province, and for completing routes at least as long as a succession of target lengths that rise as the game progresses. Play ends after each player has had an equal number of turns and at least one player has either run out of markers or completed the sequence of target lengths; the first player to satisfy either condition also receives a bonus point. In most cases, each successive instance of scoring points for the same thing is worth less; for example, the first player to dominate the region of Baden scores 3 points, the second scores 2, and the third only 1.
This description uses material from the Wikipedia article Thurn and Taxis (board game) which is released under the Creative Commons Attribution-Share-Alike License 3.0.