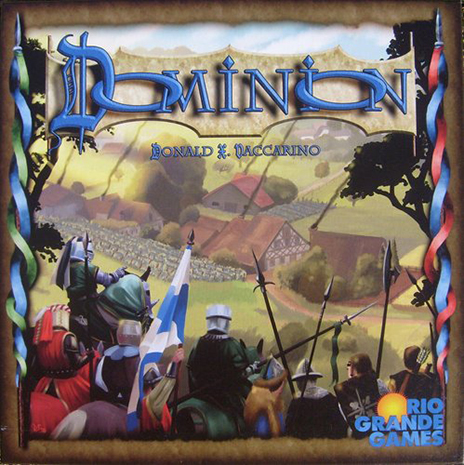 Dominion is a deck-building card game in which two or more players compete to gather the most valuable deck of cards. There are four main classes of cards:
Victory cards, which have a Victory Point value that is tallied at the end of the game to determine the winner, but generally have no value during the game.
Curse cards, which are like Victory cards, but have a negative Victory Point value that counts against the player at the end of the game.
Treasure cards, played during the Buy Phase, which generate Coins (and sometimes have other effects).
Action cards generate effects during a player's turn, allowing that player to draw more cards to their hand; generate Coins, Buys, or Actions; gain or get rid of cards; or affect other players in the game.
There are other modifying card types. Attack cards generally adversely affect other players, such as forcing them to discard cards from their hand or gain Curse cards. Reaction cards can be triggered out of turn in response to a certain event, such as other players' Attacks.
Some cards are hybrids of the above classes, such as an Action-Victory card which can be used during a player's turn but also counts as some number of Victory Points at the end of the game.

A game of Dominion in progress at the 2011 PAX East exposition
The game is always set up with the same seven stacks of basic cards; there are three stacks of Victory cards, one stack of Curse cards, and three stacks of Treasure cards. In addition, ten stacks of Kingdom cards (typically Action cards) are added to the table. The Kingdom cards can be either selected by the players or chosen randomly. Certain Kingdom cards from the game's expansions may require additional stacks to be added, such as the Potion card (a Treasure card) from the "Alchemy" expansion. These piles represent the finite Supply of cards. Finally, each player receives the same starting deck of ten cards, consisting of seven basic Treasure cards and usually three basic Victory cards. Each player shuffles their deck, and draws the top five cards to form their hand to start the game.
Each turn, the player performs the following phases (abbreviated as "ABC" to help new players remember the order):
Action phase: The player can play one Action card from their hand, following its instructions. Some Action cards generate additional Actions, which means that the player can play more Action cards.
Buy phase: The player can play any Treasure cards they want from their hand, generating Coins. Then they can buy a card from the Supply, using the Coins they have generated in their Action phase and Buy phase. If they have generated additional Buys, they can buy more than one card. All cards have the price in Coins printed on them. Bought cards are added to the player's discard pile (from which they will later be shuffled into their deck).
Clean-up phase: The player collects their hand and all played cards and places those into their discard pile. They then draw five new cards from their deck.
If at any time the player must draw a card from their deck, but their deck is empty, they shuffle their existing discard pile and use it as their new deck. Some Action cards can trash cards, removing them from the game permanently.
The game ends under two conditions: when the stack of Province cards (the highest-value Victory card in the base game) has been exhausted, or when any three other stacks in the Supply have been exhausted. At that time, the players count the number of Victory Points in their complete decks, and the player with the highest score is the winner. Other end-game conditions have been introduced in the game's expansions.
The game has been compared to the "draft" gameplay style of collectible card games where players vie for the best deck from a common pool of cards. Usually, the game's main strategy is to strive to build a deck that maximizes the player's ability to draw hands that provide 8 coins, which then allows the player to purchase a Province card, the highest value Victory card in the base game. Players must balance effective deck building to reach this coin goal with the acquisition of Victory cards to win the game; most Victory cards have no value during most of the game, and dilute a player's deck of Treasure and Action cards, clogging up their draws.
This description uses material from the Wikipedia article Dominion (card game) which is released under the Creative Commons Attribution-Share-Alike License 3.0.