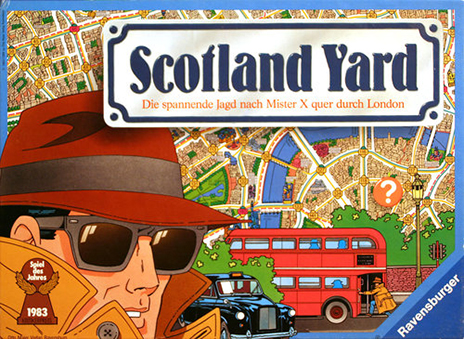 One player controls "Mr. X", a criminal whose location is only revealed periodically, and the other players each control a detective, which is always present on the board.
All players start with a number of tokens allowing them to use the following methods of transport:
Taxis allow the player to move only one space for each token used. They can be used to reach any point in London, most of which are not accessible in this game by other means.
Buses are available throughout most of the map, allowing longer-distance travel more quickly if the player is located at a bus-stop.
The London Underground also allows quick travel between distant points of London. However, stations are far apart so the use of an underground ticket can narrow down the possibilities of Mr. X's location.
Water routes are available, which only Mr. X can use, following the water buses' routes along the Thames between Greenwich and Whitehall.
Each player (Mr. X and the detectives) draws one of 18 possible cards which show where a player has to start, with Mr. X always drawing first. The locations on these cards are spaced far enough apart to ensure that Mr. X cannot be caught in the first round of play. There are a total of 200 locations on the board.
Each detective begins with a total of 22 tokens. Once each transport token is used by a detective, it is turned over to Mr. X, effectively giving him unlimited transport. As he makes his moves, he writes them in a log book or any book and covers them with the tokens he uses, so that the detectives have clues as to his whereabouts. Mr. X also has a number of 'valid on any transport' black tokens equal to the number of detectives in play (in the Milton Bradley version this is always five), and two 'move twice this turn' cards. The water routes require a black token; when one of these is played, the detectives must consider whether or not it is being used to hide a river trip. The detectives must move in the same order each turn so their moves have to be well thought out.
At five specific times during the game, Mr. X has to reveal his current position. Detectives will take this opportunity to refine their search and, if possible, plan ways to encircle him. From each known position, the types of transport used by Mr. X limit the number of possible locations he may be standing in, which provides useful information to detectives (as well as preventing some types of cheating by the fugitive player).
The game is won by the detectives if any of them catches Mr. X by landing on the same square as his current location, or it may be won by Mr. X if he remains out of the grasp of detectives until they all are unable to move (which happens after 22 moves at the latest, since all detectives will have run out of usable tokens by this point).
Although the game says it is for 3-6 players many play this game with only 2 players. The police, when controlled by 1 person, are far more coordinated and have a better chance of catching Mr. X. When 3-5 people are playing as the police they have to work as a team and coordinate their moves which can be difficult, especially when one player wants to play a hunch.
Contents: 1 gameboard map of Central London; 6 pawns; 125 fare tickets; 1 label sheet; 18 start cards; 2 double move cards; 1 logbook and pad; 1 storage tray to be used to store tickets, start cards and pawns.
This description uses material from the Wikipedia article Scotland Yard (board game) which is released under the Creative Commons Attribution-Share-Alike License 3.0.