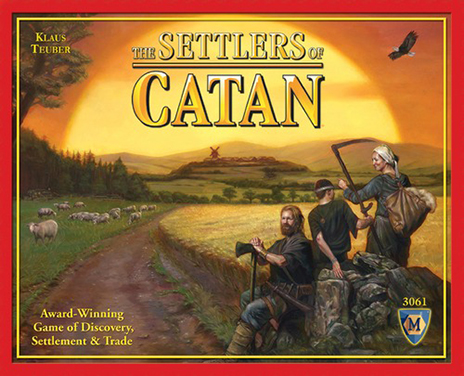 The players in the game represent settlers establishing colonies on the island of Catan. Players build settlements, cities, and roads to connect them as they settle the island. The game board representing the island is composed of hexagonal tiles (hexes) of different land types which are laid out randomly at the beginning of each game; new editions of the game also depict a fixed layout in their manual, which has been proven to be fairly even-handed by computer simulations, and recommend this to be used by beginners.

Players build by spending resources (brick, lumber, wool, grain, and ore), represented by resource cards; each land type, with the exception of the unproductive desert, produces a specific resource. On each player's turn, he or she rolls the two six-sided dice, determining which hexes produce resources. Any players with settlements or cities adjacent to hexes marked with the number rolled receive resource cards of the appropriate type. There is also a robber token, initially on the desert; if a player rolls 7, the robber must be moved to another hex, which will no longer produce resources until the robber is moved again; the player may also steal a resource card from another player. In addition, when a 7 is rolled, all players with more than 7 resource cards must discard half. However, the player gets to choose which half of their resource cards they must discard. Also, if a player has an odd number of cards over seven, such as 9, the player will round down when determining how many they will discard.

Players can trade resource cards among each other; players may also trade off-island (in effect, with the non-player bank) at a ratio of four of one resource for one of any other. By building settlements in certain spots on the edge of the board (ports), players may trade with the bank at three-to-one (3 of any single resource type) or two-to-one (two of a specific resource) ratios, determined by the port's location.

The goal of the game is to reach 10 victory points. Players score one point for each settlement they own and two for each city. Various other achievements, such as establishing the longest road and largest armies, grant a player additional victory points.

Resource cards can also be spent to buy a development card. Three types of development cards include cards worth one victory point; knight cards (or soldier cards), which allow the player to move the robber as if they had rolled a 7; and a third set of cards which allow the player one of three abilities when played.
Teuber's original design was for a large game of exploration and development in a new land. Between 1993 and 1995 Teuber and Kosmos refined and simplified the game into its current form. Unused mechanics from that design went on to be used in Teuber's following games, Entdecker and Löwenherz. The game's first expansion, Seafarers of Catan, adds the concept of exploration, and the combined game (sometimes known as "New Shores") is probably the closest game to Teuber's original intentions.

This description uses material from the Wikipedia article The Settlers of Catan (board game) which is released under the Creative Commons Attribution-Share-Alike License 3.0.